SoaP Pen co-founders Amanat Anand and Shubham Issar are both originally from New Delhi and met at Parsons School of Design in New York City while each pursuing a BFA in Industrial and Product Design. 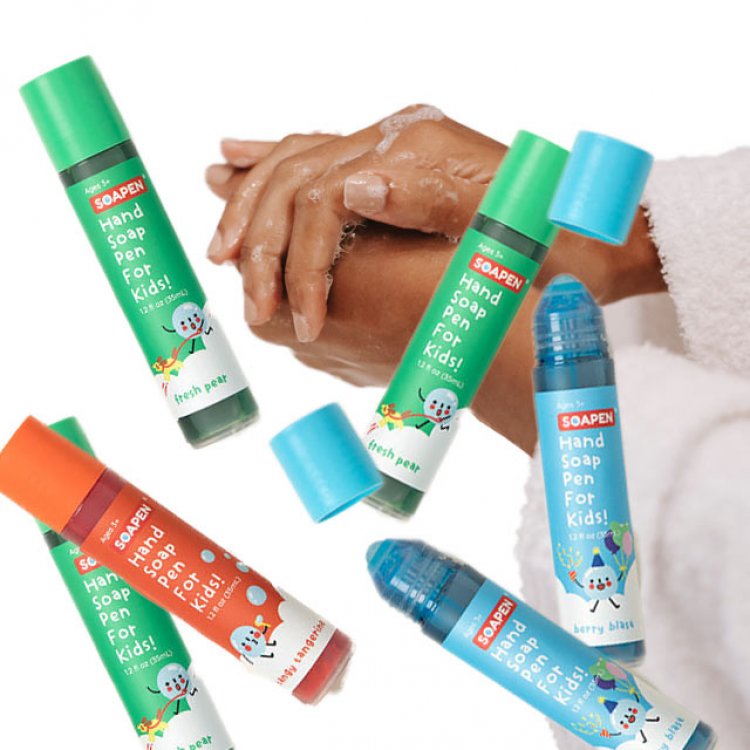 SoaP Pen is a colorful soap-filled pen that is fun for young children to wash their hands. They can draw all over their hands and as they remove their “artwork” with water, they wash their hands for the CDC recommended 20-40 seconds.

SoaP en co-founders Amanat Anand and Shubham Issar are both originally from New Delhi and met at Parsons School of Design in New York City while each pursuing a BFA in Industrial and Product Design.

After graduation, Amanat worked for ASH NYC and Uhuru Design as a furniture and CAD designer. Shubham was a designer and project manager at Stand and Build. They teamed up to participate in the UNICEF Wearables for Good Challenge, which promotes design and technology ideas that help improve society. After learning that more than 50% of infectious diseases that kill children under 5 could be prevented by simply washing hands with soap, they wanted handwashing to be fun. They submitted their design for the SoaP en, won, and used the prize money to start the research and development needed to turn a brilliant idea into reality.

They approached industry experts in chemical engineering, manufacturing and e-commerce.

They tested their first prototypes at Reece School, a nonprofit special education elementary school in New York City. The SoaP en was very effective in teaching children how to wash their hands properly. Amanat and Shubham continue to work with the school for various events.

Their mission is to make handwashing with soap fun and accessible to children around the world. For every three pens sold in the U.S., they donate one SoaP en to a school in a low-income community in India.

Regular hand sanitizer can be harmful to a child's skin. SoaP en gel is formulated according to FDA and WHO regulations with 70% alcohol content combined with vitamin E and lavender and eucalyptus essential oils that soothe and leave a subtle fragrance. The gel is 99.9% effective against the most common germs while leaving hands soft and hydrated. The nozzle has a fine tip so that the gel is not wasted, as often happens with a pump dispenser.

Awards for SoaPen, Amanat and Shubham

Amanat and Shubham were on Forbes magazine's “30 under 30” list in health and science.

Shubham represented SoaP en at the Global Health Innovation Conference at Yale University and the Global Entrepreneur Summit at Stanford University.
Amanat received the Toyota Mother of Invention Award, which included a $50,000 prize.

The two co-founders were accepted into the Pursuit Incubator, a mentoring program for entrepreneurs whose products and companies will impact impoverished regions.

They also worked with the Halcyon Incubator, which empowers visionaries to turn their ideas into measurable social outcomes.

SoaP en placed second in the James Dyson Award, an international award honoring the next generation of designers.

SoaP en has been featured in a variety of magazines, including Real Simple, Money Magazine and Now This.