French actors: This Wednesday, February 16, Gerard Depardieu signed up on Instagram. The actor then surprised his community with some rather surprising posts 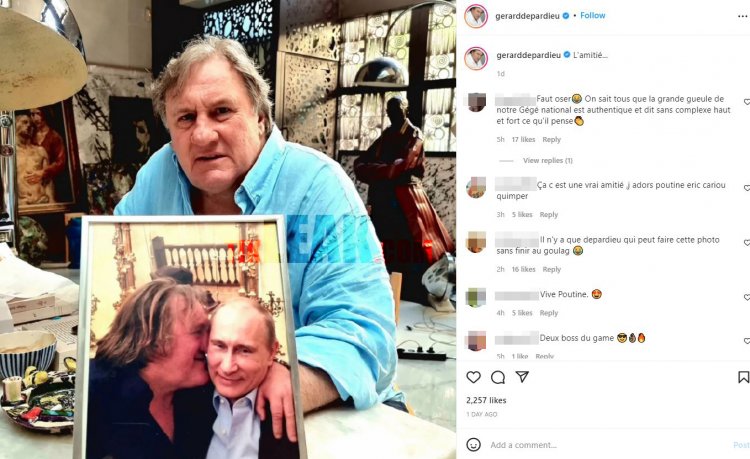 This is good news for the actor's fans. This Wednesday, February 16, Gérard Depardieu joined the social network Instagram. Aged 73, the actor decided to share his daily life with his 7,000 fans and was quick to publish some rather surprising photos. Indeed, among the four shots that appear on his account, his subscribers could see him on a photo alongside Vladimir Putin, embellished with a rather explicit caption: “Friendship”. It must be said that the actor is a great friend of the Russian president.

But it was in a report that Gerard Depardieu surprised his fans even more by directly addressing a PSG player: Kylian Mbappé. "Kylian, I met Alex Ferguson who said a wonderful sentence about the Champions League and Zidane: 'Give me ten pieces of wood and Zidane and I'll bring you the Champions League,'" he told the camera, before continuing, "Well, I saw him again, he said: 'Give me ten pieces of wood and a Kyllian and I'll bring you the Champions League,' so I think you're going to bring it anyway. There are a lot of idiots who say 'he has a big head', they are PSG fans... but you are something else, you are one of Alex Ferguson's pieces of wood. So, bye bye".

Gérard Depardieu confides on his alcohol consumption
A way of his own to launch himself on Instagram, he who was on the set of Quotidien last February 15. Gérard Depardieu then confided in privacy on his consumption of alcohol: "I can not drink anymore because I can not stand. (...) The other time, I wanted to show off and I drank two gins at a friend's place, rue du Cherche-midi. I was unable to go home. (...) I left on my scooter and I collapsed. (...) I fell into a kind of coma. I parked the scooter and then boom!" he revealed on the set of TMC.

Fitness influencer Brittany Dawn is being sued by the state...