Gerd Müller, one of the great names of German soccer, died this Sunday morning (15), at age 75. 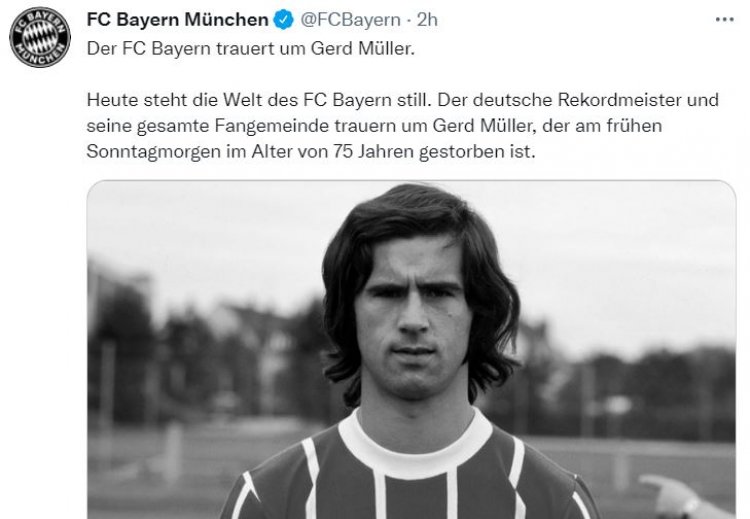 The news was confirmed by Bayern Munich, which emphasized his brilliant career with the Bavarian team. The cause of death was not disclosed.

With the German club shirt, Gerd scored 566 goals in 607 official games. Of these, 365 were in the German Championship, which makes him the highest scorer in the competition's history. For the German national team, he scored 68 goals in 62 games.

After starting his career with TSV 1861 Nördlingen, Muller spent 14 and a half seasons with Bayern, finishing his career in the United States with the Fort Lauderdale Strikers.

After retiring from the pitch, Muller served as an assistant coach for Bayern Munich's B team. In 2015, he was diagnosed with Alzheimer's disease

Oliver Kahn: "Forever in our hearts"

"The news of Gerd Müller's death affects us deeply. He is one of the greatest legends in FC Bayern's history, his achievements are incomparable to this day and will forever be part of the great history of FC Bayern and all German soccer. As a player and as a person, Gerd Müller represents FC Bayern and its development as one of the biggest clubs in the world like no other. Gerd will remain in our hearts forever," said the Bayern CEO.

Herbert Hainer: "Today is a sad day for Bayern"

"Today is a sad day for FC Bayern and all its fans. Gerd Müller was the greatest striker who ever lived - and a great person, a personality in world soccer. We are united in deep sadness with his wife Uschi and his family. Without Gerd Müller, FC Bayern would not be the club we all love today. His name and his memory will live forever," said the Bavarian club president.

Testicle gets stuck in Plastic Chair, Ambulance had to come