Gareth Southgate, England's coach, ran over to Roberto Mancini, his Italian colleague. To congratulate him. It was the first time he had run over after meeting his own ghost, so no one would have blamed Southgate if he had run screaming from Wembley Stadium in London 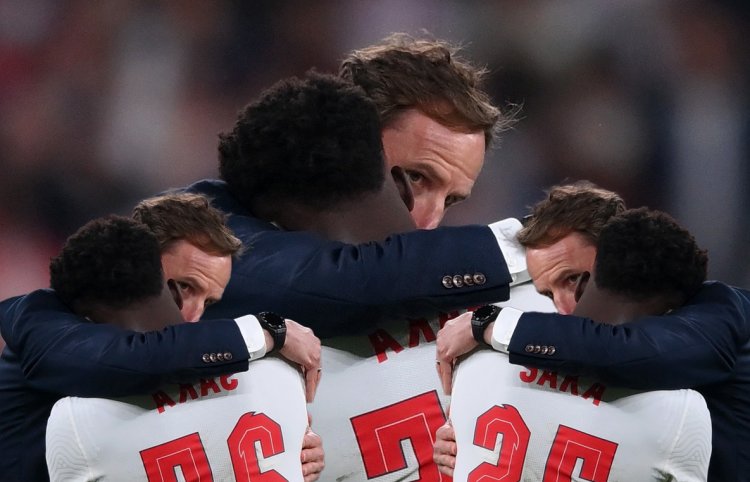 In 1996, as a professional, he had missed the decisive penalty against Germany in the semifinals of the European Championship, and now he was coaching a team that had missed out on the European title in the most dramatic way. Also, after shoot-out.

How many traumas can a nation overcome in just one tournament? Perhaps only one. First, England knocked Germany out in the round of 16 - but now it was over. Around Southgate, the English fans fell silent. Can an entire stadium go into shock? The camera caught Prince William staring into the air. Next to him was his son, George Alexander Louis of Cambridge, seven years old. The little prince was crying. One day, perhaps, the whole British Empire will be subject to him, but that was no consolation now. Only the Queen, she was not there at all.

It seems that the monarch will be hit by the greatest trials only in the fall of her reign. First the Brexit, then the megxit of Prince Harry and Duchess Meghan from the royal family. Now also this final lost in a penalty shootout in the Corona Temple at Wembley, in which not only the droplets flew, but the madness of 60,000 mostly half-naked people danced. Even before kickoff, worrying reports made the rounds that hundreds of fans had forced their way past security into the arena. The Queen passed this test as well, skipping the final and instead taking care of her health.

Elizabeth II was 40 years old when she presented the World Cup trophy to England captain Bobby Moore at Wembley 55 years ago. At the time, she probably didn't even notice that the German Helmut Haller, despite losing the game, grabbed the ball after the final whistle, smuggled it home and only returned it 30 years later. A final like that, especially one at Wembley, writes more stories than there's room for in a book.
Roberto Mancini didn't grab a ball on Sunday; it wouldn't have fit under his tailored white slim-fit shirt. But he stood there in the confetti rain, had his wardrobe ruined, and cried tears of happiness.

England with an attack that surely made the Queen proud

In the absence of the Queen, Uefa President Aleksander Čeferin presented the trophy to Italy captain Giorgio Chiellini. And England had lost the second important final in its history. World champions in 1966, but now only second in the 2021 European Championship. 55 years of humiliation and disappointment, which often had something to do with penalty shootouts against Germany, they went into extra time on Sunday in a bombastic fanfare.

Berardi scored. Kane scored. Pickford held off Belotti. Maguire scored. Into the corner. Bonucci scored. Rashford waited, delayed, tripped, shot against the post. Bernadeschi scored. Donnarumma held against Sancho. Pickford and the post held against Jorginho. Donnarumma held against Saka. And England were stranded in a valley of tears. Especially since Southgate had substituted Sancho and Rashford as supposed specialists for the penalty shootout. Football's not coming home. It's going to Rome.

Two goals were scored in regulation time. The first was the fastest ever scored in the history of the final: Luke Shaw scored after two minutes. Leonardo Bonucci equalized after 67 minutes, and this too was historic: at 34 years and 71 days, he was now the oldest scorer in a European Championship final, beating Bernd Hölzenbein's record (30 years, 103 days) from 1976.

Two very different halves
On Sunday, the two best teams of the tournament played a mediocre final with very different halves. The English kicked off as if they had each read the letter three times that the Queen had sent to the team before the final for literary edification: "I send my best wishes for Sunday, in the hope that history will not only honor your success, but also the spirit, dedication and pride with which you presented yourselves."

With abandon, but without excessive spirit, first Harry Maguire, who had been crowded out in his own penalty area, shot the ball over his own goal line after 60 seconds. A little bit of stage fright. The Italian corner kick fizzled out - but then came an attack that was sure to make the Queen proud in front of the TV. Harry Kane carried the ball through the center, played on the right flank to Kieran Trippier. He crossed to the left, where the incoming Shaw boldly drop-kicked home from a few yards. In the stands, Prince William hugged his son, Prince George grinned and clapped. After all, everything was going according to plan.

Coach Gareth Southgate once again fielded the three-man backline that had paralyzed the DFB team in the round of 16. Goal scorer Shaw was the advanced left-back and crosser Trippier the right-back in his system, which initially worked brilliantly. The Italians didn't change a thing, probably thinking: If you're unbeaten for 33 games in a row, you don't have to come up with anything crazy for a European Championship final.

This duel between the two best defensive teams of the tournament began as a running spectacle. Italy was doomed to score, but did too little to do so, while the fiery English didn't stonewall, but pressed for a second goal. It was as if they wanted to play it safe and earn an entry in the encyclopedia of British soccer with a performance full of dedication. And their coach, Southgate, was initially unconcerned about informing the players that a dirty win would suffice for this purpose.

Italy played as patiently as if they were following a secret plan based on the concept of playing twice 180 minutes. The only chance in the first half was created by the speedy Federico Chiesa all by himself when he broke through in the center and put the ball next to the post from 20 yards. England then calmly drew two lines of defense in and in front of their penalty area. It looked like a tribute to the tradition of their guests, the good old catenaccio that Italy had used to brick their way to four World Cup titles. And Mancini's modern Italy failed to find an answer from within the game; all attempts to send a pass steeply through the British ranks failed.

Mancini's team remained the more active in extra time
The match had just restarted when Sterling was brought down in the penalty area after a challenge from Bonucci. In the semifinal against Denmark, Sterling had brought out the decisive penalty with a somewhat over-theatrical fall. This time, the whistle failed to blow.

Mancini brought on striker Domenico Berardi for the completely inconspicuous Ciro Immobile. But the game remained true to itself: lots of running, few chances. Maguire's header flew over the crossbar, while Lorenzo Insigne shot at British goalkeeper Jordan Pickford from an acute angle. Pickford was only threatened when Chiesa again burrowed through the penalty area on his own and found the finish.

Italy's equalizer was not undeserved in view of the increasingly defensive English: after a corner, Pickford directed Verratti's header against the post. However, center back Leonardo Bonucci rushed in from behind and dusted the ball down (67th).

Southgate's catenaccio now seemed to be taking its revenge. The Italians felt that the English had removed the risk from their game too early. Perhaps Southgate should have recited the Queen's lines again in the dressing room, there was now little sign of dedication. Italy pressed, and after a fabulous through pass from Bonucci that spoke of self-confidence, Berardi shot over the crossbar. The worst possible misfortune befell Italy before the end of regulation time: the tireless Chiesa was injured in a running duel and had to leave the pitch. At least the injured Jorginho was able to continue.

Mancini's side remained the more active team in extra time, with Federico Bernardeschi, a substitute for Chiesa, narrowly missing a cross that almost reached him on the goal line. On the other side, John Stones just missed in front of Italy goalkeeper Donnarumma. This game had long since ceased to deserve a winner.

The English were running a bit more now, they wanted to avoid the penalty shootout, they were running against their trauma. It was too late.