Monkeys kill dogs, India—A group of monkeys in a small town in India took “revenge” on the local dog population this month by throwing them off tall buildings and trees. The monkeys are reported to have killed about 250 puppies in the process and are now targeting villagers. 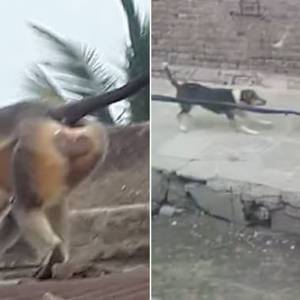 A group of monkeys in a small town in India took “revenge” on the local dog population this month by throwing them off tall buildings and trees. The monkeys are reported to have killed about 250 puppies in the process and are now targeting villagers.

The monkeys in Majalgaon, India, began the rampage after some of the dogs reportedly killed a baby monkey. News18 reported that when a dog approaches, the monkeys catch it and throw it to the ground from a great height.

In the neighboring village of Lavool, the monkeys completely wiped out all the dogs. After all the dogs in the village were killed, the residents contacted Forest Department officials to capture the monkeys. But when the officials tried to catch the monkeys, they could not catch a single monkey.

The villagers believe that the monkeys are taking revenge on the dogs, News18 reported. Now villagers in Lavool are being chased by the monkeys, and some have even been attacked.

According to Stephanie Poindexter, assistant professor at SUNY Buffalo whose research focuses on primate behavioral ecology, these studies have shown that animals—mainly monkeys—can seek revenge.

"We've seen that if a person is attacked in some way, they're more likely to attack someone related to their aggressor,” Poindexter told Gizmodo. “Typically, people prefer to attack a third party related to the original aggressor, as opposed to the actual aggressor … for the most part, these 'acts of revenge' take place shortly after the attack.”

Poindexter also explained that hyena groups are known to take revenge on the attacker's relatives rather than the actual attacker.

After the forestry department failed to catch any of the monkeys, the villagers tried to rescue the dogs themselves. But some of them were subjected to the monkeys' retaliation, and some even injured themselves or fell off buildings, News18 reported.

In Malaysia, a wild monkey captured a puppy and held it hostage for three days at the top of a tree. According to locals in the area, the puppy was about two weeks old when the macaque abducted it.

Macaques are notorious for being extremely intelligent, but also sneaky. Some locals have seen the monkeys raiding their pantries, snatching clothes and searching refrigerators. Due to the growing number of complaints, Malaysia's Department of Wildlife and National Parks began killing thousands of macaques each year.

However, many believed that the monkey was not trying to hurt the cub, but was grooming it as its own.

"It looked like it was treating the cub as a friend or a baby, it was very strange," Cherry Lew Yee Lee, a bystander, told Newsflare.

Footage of the incident showed the puppy trying to break free from the monkey's grip, but it was unsuccessful. Eventually, residents were able to scare the monkey into dropping the puppy into the greenery below.