The publishing house Flatiron Books said that Elliot Page was preparing his autobiographical book, which should be released in 2023 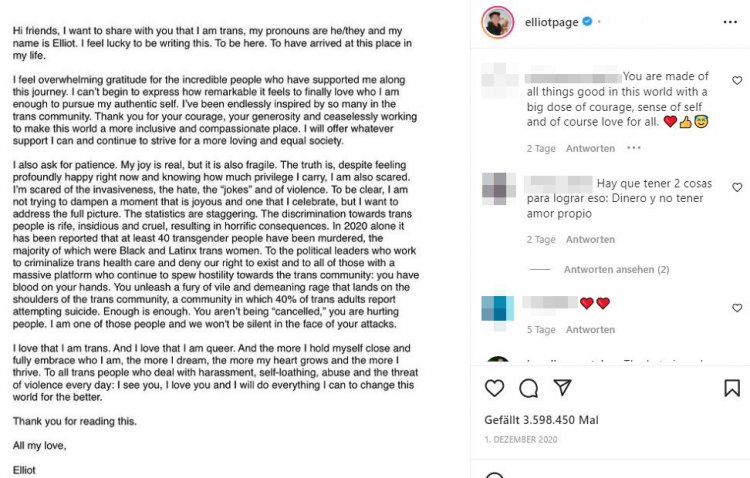 This Thursday, February 17, 2022, the publishing house Flatiron Books revealed that Elliot Page was writing his memoirs entitled “Pageboy”. The Canadian actor will talk about his film career, his Oscar nomination in 2008 and his trans-identity. "This memoir will focus on (Elliot Page's) relationship with his body and his experiences as one of the most popular transgender people in the world. The book will also talk about mental health, assault, love, relationships, sex and Hollywood," the publisher revealed. But before you can read this autobiographical book, you will still have to wait until 2023.

It was in December 2020 that Elliot Page (born Ellen) had come out. Subsequently, on his Instagram account, he had published a long message addressed to his fans to reveal his new identity. "Hi friends, I wanted to announce that I am trans, my pronouns are he/they and my first name is Elliot. I feel lucky to be writing this, to be here, to have reached this point in my life (...) the truth is that while I am deeply happy now and am aware of the privilege I have, I am also afraid. I'm afraid of the oppression, the hate, the jokes and the violence," he revealed.

Three months later, he posed on the cover of "Time" magazine and gave an interview. The star of the series “Umbrella Academy” had confided for the first time about his change of identity and his operation. "I felt like a boy, I wanted to be a boy. I asked my mother if I would ever be one," he had said, recalling the memory of his 9 years when his mother had allowed him to have short hair.

Shailene Woodley and Aaron Rodgers have reportedly broken up